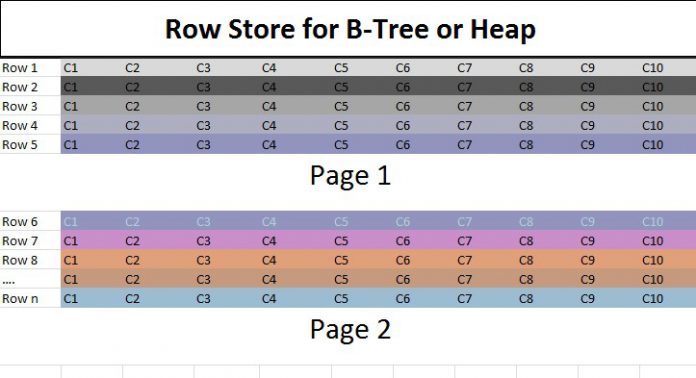 I would like to add a pretty good article on “Non-Clustered Column Store Index in SQL Server 2012” from my friend “Srikanth Manda”. Hope you will enjoy this.

Everyone agree the fact that hardware speed and capacity has increased past two or three decades, but disk I/O (Input/Output) or disk access or data transfer rate has not grown up to the expected level and is still the slow. One key point to remember, as time is moving forward the size of the database become larger and larger. Data present now would increase by almost 10 times in next 2 to 3 years from no. We have provide a technology in SQL Server which can be addressed this kind of data growth with Data Warehouses. Secondly, the size becomes bigger the query performance is also very critical. Customers would like to have a response like a inter active, they want to have large amount of data, they want to process the data and get the results in the query like attractive fashion. Thirdly, that we are seeing is Data Warehouse has become more like a commodity and provide Data Warehouse technology to masses. Finally, the amount of data in data warehouse (DWH) is growing tremendously day by day. When you want to retrieve (Query) data from Data Warehouse, it takes quite huge amount of time. This would degrade the performance of the Data Warehouse. All these issues can be addressed by Non-Clustered Column Store Index.
In the Article, We will learn about this new feature, how can we build this, how it is in SQL Server, how exactly the data is stored, what happens underneath the engine, how this improves performance of Data Warehousing Queries.
In any traditional relational DBMS, the data is stored as rows (B-Tree format). Like, Microsoft SQL Server stores rows in a page of size of 8 K. If you have a row of 10 columns, you store Row 1 , Row 2 and when page becomes full the page 8 K, then Row goes to second page and so on. This is how the data is stored, successfully formats and successfully for OLTP Workloads. For example consider the image below the data for ten columns for each row gets stored together contiguously on the same page and once the data is full and the row goes to second page. What has changed is, instead of storing data in the row format other way to look out is can I store data in the Column Store format. For example, I have a table with C1 to C10 columns, instead of storing as rows will store as columns. Then we have storage as Column C1, C2… C10. When we store data in the column store format, we get very good compression. The reason is data from same column is of same type and domain, so it compresses very well. For example, A company is operating globally throughout the world. All the employees from India, there mention the Country as India. Similar, employee from US would mention as ‘US’ as Country. Here, Column with Country would be compressed because it is a repetitive pattern. This kind of opportunity is available in Column Store Format rather than Row Store Format.
In the Row Store Format, data stored for all ten columns C1, C2, C3, …., C10. If we want to retrieve only columns like C1,C3,C5. What happens in the Row Store Format is we need read/fetch data for the entire row of 10 columns then predicate is applied for the specified columns. But, in case of Column Store Format, we can fetch only the required columns i.e.; Columns C1,C2,C3 etc. In this case, it reduces I/O and data fits in memory with which you get much improved performance. You can improve how the query is processed using Column Store technology that gives much better response time.
If we create Non-Clustered Column Store Index, the data is stored in column format.

If we store data in column format, suppose we store 10 million rows, we cannot store all 10 million rows of column C1 as storage unit. What we do is we break those rows into smaller chunks, which we call have as row group.

Note: Blue color box are nothing but segments.
Important Points to remember:
1) Row group
• set of rows (typically 1 million)
2) Column Segment
• Contains values from one column from row group
3) Segments are individually compressed
4) Each segment stored separately as LOB’s as Binary Format
5) Segment is unit of transfer between disk and memory

New Batch Processing Mode
1) Some of the more expensive operators(Hash Match for joins and aggregations) utilize a new execution mode called Batch Mode
2) Batch mode takes advantage of advanced hardware architectures, processor cache and RAM improves parallelism
3) Packets of about 1000 rows are passed between operators, with column data represented as a vector
4) Reduces CPU usage by factor of 10(sometimes up to a factor of 40)
5) Much faster than row-mode processing
6) Other execution plan operators that use batch processing mode are bitmap filter, filter, compute scalar
7) Include all columns in a ColumnStore Index

When I ran the query with STATISTICS IO ON, I found stunning results (with significant performance) of using column store index vs regular index, as you can see below:

For column store index exclusively, SQL Server 2012 introduces a new execution mode called Batch Mode, which processes batches of rows (as opposed to the row by row processing in case of regular index) that is optimized for multicore CPUs and increased memory throughput of modern hardware architecture. It also introduced a new operator for column store index processing as shown below: Restrictions:
1) Cannot be clustered
2) Cannot act as PK or FK
3) Does not include sparse columns
4) Can’t be used with tables that are part of Change Data Capture or FileStream data
5) Cannot be used with certain data types, such as binary, text/image, row version /timestamp, CLR data types (hierarchyID/spatial), nor with data types Created with Max keyword eg: varchar(max)
6) Cannot be modified with an Alter – must be dropped and recreated
7) Can’t participate in replication
8) It’s a read-only index
a. Cannot insert rows and expect column store index be maintained